I've heard so many good things about the food in North Park so when our schedule suddenly cleared up that day, we ventured to test out this theory.  Taste of North Park was held on Saturday Oct. 8 from 11am-4pm. Between the generous five hours and the proximity of most restaurants, we were able to sample all 46 locations! 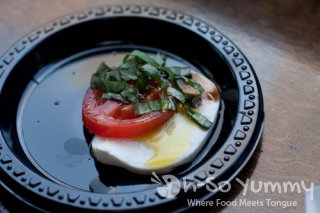 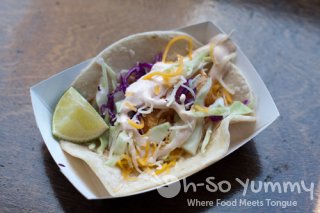 U-31 Cocktail Lounge - We skipped a few locations with long lines and got ahead of the crowd by starting here.  The caprese had a very mild mozzarella topped by a mostly fresh tomato and basil but was a little lacking for me.  The fish taco was standard but at least it wasn't overcooked!

El Comal Antojitos Bar & Grill - We picked up the sample, took a bite, and found the bottom layer to be thick yet satisfyingly compatible with the toppings!  A cup of hortacha accompanied it and I absolutely loved the light sweetness and finished it quick!  I anticipate coming back to see what other tasty morsels are offered here!

Fat Boy's Cornerstore & Deli - Boar's Head meat is one of the best deli meats we've tried and the meats were as expected.  However, the rest of the sandwich was a little underwhelming with very soft bread and too much mayo.

Spice Mexican & Mediterranean Fusion - Pretty much everything we ate off this plate was delicious!  The meats were well spiced and cooked tender.  I just wish I knew what exactly was on the plate! 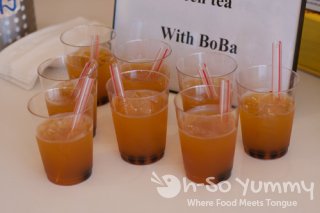 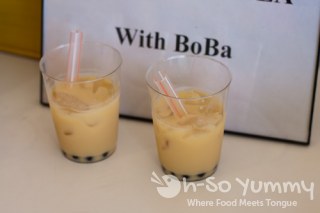 YogArt Frozen Yogurt & Smoothies - We had a choice of yogurt or boba.  Since it was too early for dessert, we picked the passion fruit boba to quench our thirst.

Ranchos Cocina - I loved that they had live music on the side as they were serving the crowds. The shredded chicken was relatively clean to eat.  I wasn't too impressed with the boring vegetarian tamale or the overpowering bell-pepper salad.

El Take It Easy - We were given a shot of Whisky Sour and this taco, which was just okay.

The Office Bar - We had a choice of three different Svedka cocktail mixes or sangria.  We chose the Svedka with aloe because it just sounded cool!  The taste was crisp and clean with a slight sweet that I would be willing to drink again. 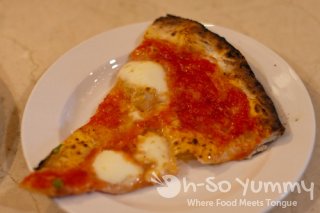 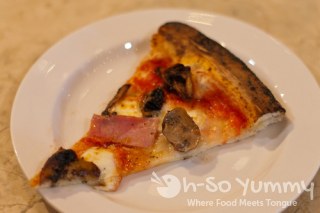 Caffe Calabria - This place has hot coffees and pizzas all in one!  I ordered a cappuccino and we munched on two slices of pizza while waiting.  The one on the left had globs of mozza cheese while the right had some tasty meats on it.  I just wish that the pizza crusts and bottoms were a little less charred which spoiled some of the taste for me.

Toronado San Diego - Dennis picked up this sloppy joe looking sandwich from Toronado and we gave it a try.  I thought it was similar to the canned sauce I could buy from any grocery store.

Sicilian Thing Pizza - As soon as you walked in, the aroma of freshly baked pizzas hits you in the face.  We picked the deep dish sausage and pepperoni slice for sampling.  It was instantly one of my new favorite pizzas with its nice fluffy breading and choice meats. More please!

The Linkery - We were given a toothpick to pick up sausage that was nicely smoked and bite-size.

Tribute to Mankind - We sampled unsweetened tea from here.  I didn't really like it (I like sweetened tea) but Dennis was quite happy with it.

30th Street Cafe - I can't remember what this is called but it was like taking a bite of an egg omlette.   We couldn't taste any of the other ingredients.  Hopefully the full size would have more fillers?

Lefty's Chicago Pizzeria - At Lefty's was another deep dish pizza to add to our pizza cravings.  I've heard about this place for a while and finally got to try out Lefty's famous pizzas!  There was also pasta offered but it was very plain compared to the pizza. 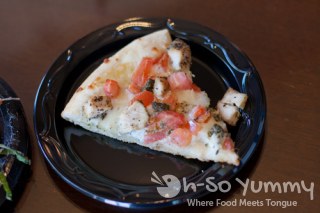 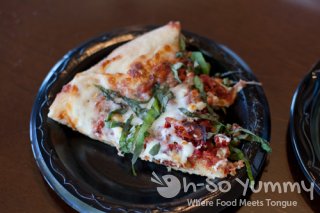 Mosaic Wine Bar - We had our choice of one red wine, white wine, red sangria or white sangria.  If that weren't enough, the food server had 8 tantalizing varieties of pizza to choose from: we narrowed it down to one chicken pesto and one sundried basil slice.  Both were extremely satisfying and had crispy thin crusts.  I wish we could have tried all the varieties!

Smoking Goat - I've never had goat meat and this was a great first!  The meat was sitting in some of its own juices which made it little messier but totally worth it! The rest of the toppings melded together wonderfully in the mouth.

Bluefoot Bar & Lounge - We were offered a sweet cocktail here.

Sea Rocket Bistro - The hostess told us we would be sampling Smoked Cod but then found out they were out of fish so all we got was the toppings.  Interesting overall, especially the honey layer beneath the creamy vegetables, but it still needed the fish...

Zensei Sushi - We drank the so-so miso soup, took a bite of what seemed to be leftover tuna atop common seaweed salad, and gobbled the sushi which was no longer crispy on the outside.  I would hope that ordering it fresh would be much better.

to be continued here

I saw a friend post a facebook link about Ramen Yokocho Fest 2014 and I immediately knew Dennis would want to go! He is, after all, the ramen expert of our... continue reading

If you're a fan of tacos, then Tacotopia is a MUST! San Diego Reader holds two events each year, one at Golden Hill in May and one at the Del Mar Racetrack... continue reading

Highlights of the Chocolate Decadence Event at Pechanga - Temecula, CA

Last weekend, we had the opportunity to check out the Chocolate Decadence at Pechanga Resort and Casino. The festival offered chocolates and pastries as... continue reading