Veg N' Out - This slider was different than the vegetarian patties you find at the grocery store, and the onions were cooked a slight bit raw.

Eddie's Philadelphia Steaks - We selected the beef with american cheese sample.  The meat was slightly underseasoned but the bread had a nice toasty feeling in our mouths.  I like when philly sandwiches aren't overly cheesy and greasy yet still have a decent taste.

Paesano's Fine Italian Food - This lasagna was completely falling apart as we tried to eat it.  The pasta noodles were overcooked and the sauce was way too runny.  Maybe it needed more resting time!

True North Tavern - This taco was the messiest of any we ate that day and it just didn't have any flavor, perhaps too much pico de gallo.

Urban Solace - We liked this sample here with its thick breading and flavorful meats. I would like to come back to try some of their other foods.

Pigment - The beer offered here was way too hoppy for me.

Heaven Sent Desserts - Layers of banana flavored cream between fluffy chocolate cake greeted our mouths at this dessert place.  My friends love this place and I can totally see why they would!

Side Street Thai Kitchen - I thought the fried rice was quite average.

Splash Wine Lounge & Bistro - This place is neat because you can sample wine through dispensers for as little as $1 a taste.  We were able to taste either a red or white wine near the front.  In the back we picked up a slice of pizza and artichoke crostini. 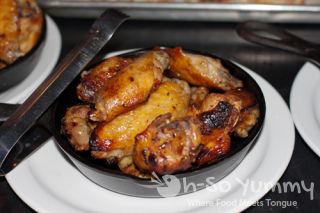 URBN Coal Fired Pizza - The meatball was the best part of the samples here.  THe chicken wings were weakly seasoned and some parts were a little dried out.

La Herradura Taco Shop - We were handed a mini version of the Super Burrito, which normally is about 20" long!  The taco had a nice meat to tortilla ratio.  After taking a bite, we put the rest away for later!

Overload - Karl Strauss beers were offered here but they ran out of red trolley, the one I would have drinken.  Otherwise, there was a darker ale available. 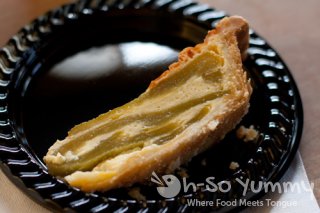 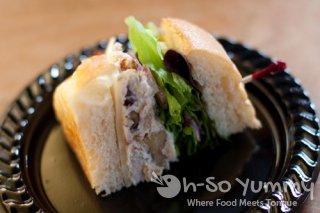 Claire De Lune Coffee Lounge - The chile quiche here is quite good!  You get a real mouthful of chile pepper in each bite that has the taste without as much of its bite (usually from the seeds).  The turkey sandwich was also light and tasteful.

Rosaria's Pizza/The Foundry - This place's menu is very eclectica and changes on the whim of the staff.  They offered pho (Vietnamese beef noodle soup) or vegetarian pizza.  Some nights they even offer Thai food.  We sampled their pizza but mounds of garlic turned us off and we couldn't finish the slice. Luckily they change their menu often!

Hunt & Gather - We sampled grape flavored Svedka, one mixed with Sprite and the other with grape juice.  The former was light and sparkly but the latter was a little too much grape.

West Coast Tavern - The bread pudding dessert here was so soft and sultry that we couldn't stop eating it!  I declare it one of the best desserts I've tried in a while with nothing similar to it!

Philly Grill - This location was 10 blocks west of the closest participating location so we hit it last by car.  Unfortunately the distance also led to cold premade philly sandwich samples.  I reheated it at home later and found that it was better than reheating the other philly.

When it was all over, we were extremely stuffed, slightly tipsy and ready for the oncoming food coma.  Food and drinks: a great combination!

We're loving the holiday season in San Diego. Earlier this month we took a stroll through Hillcrest with a buddy for the Taste N Tinis event... yummy... continue reading

I've heard of the Bite San Diego walking tours before and was finally able to check one out last week. The El Cajon Boulevard tour we signed up for is a new... continue reading